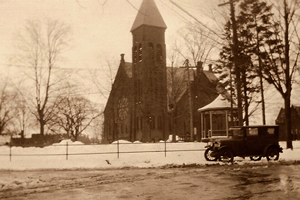 We gathered on October 3, 1733 with the Reverend Grindall Rawson in the building that is currently the restaurant at the head of the Common as the 2nd Church of Hadley. It remains one of the oldest standing meetinghouses in active use, although no longer in use for religious purposes, in the United States. The present church building is our fifth.

In 1759 the church was formally incorporated as the 1st Precinct of South Hadley. Then in 1824 we were incorporated as the 1st Parish of South Hadley. In 1827 the church parish and the church were incorporated as one body, becoming the First Congregational Church of South Hadley. Here’s an explanation of all of this “incorporation.” As a precinct we were a part of a territory, in other words, part of Hadley’s original land grant by the King of England. We had a definite function and therefore politically and administratively we were deemed a “precinct” or the South Precinct of Hadley to be exact. When South Hadley became an incorporated town in 1753, we became the 1st precinct or a “subdivision” for political purposes. The Parish designation was given to us because we were considered a “church unit” meaning an area of land committed to one minister/pastor. The residents were then known as parishioners. A parish is associated with the Protestant church and stems from an original church community.

Our church had a working relationship with Jonathan Edwards of Northampton, a philosophical theologian who introduced the Great Awakening in the 1700s and who supported the Halfway Covenant. This covenant was devised to find a place for parishioners who were baptized but could not make a strong enough confession of faith in Christ before the church body. It provided a form of church membership which did not allow a place at the communion table or a voice in the church government.

The Hampshire Missionary Society, one of the oldest missionary groups in the United States, was founded in 1804 by Center Church members, serving in Africa, China, India and Polynesia.

Mary Lyon became a member in 1837 after founding Mount Holyoke Female Seminary with our unswerving spiritual and financial assistance. We guard the Mary Lyon Bible as one of our cherished “relics” saved from two church fires.

Our Sunday School was founded in 1819. It was redesigned in the early 2000s by Rev. Randy Purinton, Christian Education Director (2004 -2007) and became known as the “Promised Land.”

Center Church women were allowed to vote in 1921.

By 1954, it became increasing apparent that Center Church needed an addition to house its growing Sunday School population. A committee was formed and the Education Building was completed by 1956. In 2000, we renamed the building the Lancaster Education Building in honor of Rev. James L. Lancaster (1953 -1969)  who spearheaded the campaign.

Some of our members, among them Joy Dickinson Bock and Ruby Flood Carver, created the Center Church Pre-school in 1957 which is still housed in the Lancaster Education Building.

Our Reverend Carlos Avila and Reverend Gus Peterson joined together to found the vital Holyoke Hispanic organization, Nueva Esperanza, in 1982. Ongoing today, it promotes neighborhood revitalization by rehabilitation of older buildings into modern living spaces. We now help and build Habitat Homes, two being on the corner of Cabot and Elm Streets in Holyoke.

In 1995, an ambitious renovation of our church sanctuary was started to commemorate its 100th anniversary. From that project sprang the construction of a building connector referred to as the connector/elevator project (all costing over one million dollars!) which culminated in a dedication ceremony on February 6, 2000. The crossway is named the Bock Crossway in honor of Warren and Joy Bock who worked tirelessly from its inception until it was completed.

We voted to support and allow same gender marriage ceremonies in our sanctuary.

There is so much history here at Center Church and we all contribute to it on a daily basis. May we enjoy many more productive years here on the common in South Hadley.

Everyone must come out of Exile in their own way.** 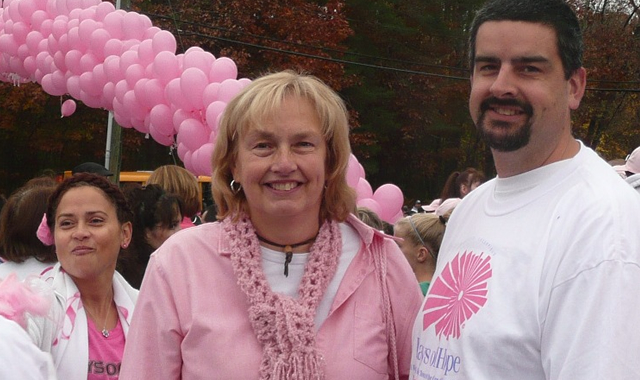